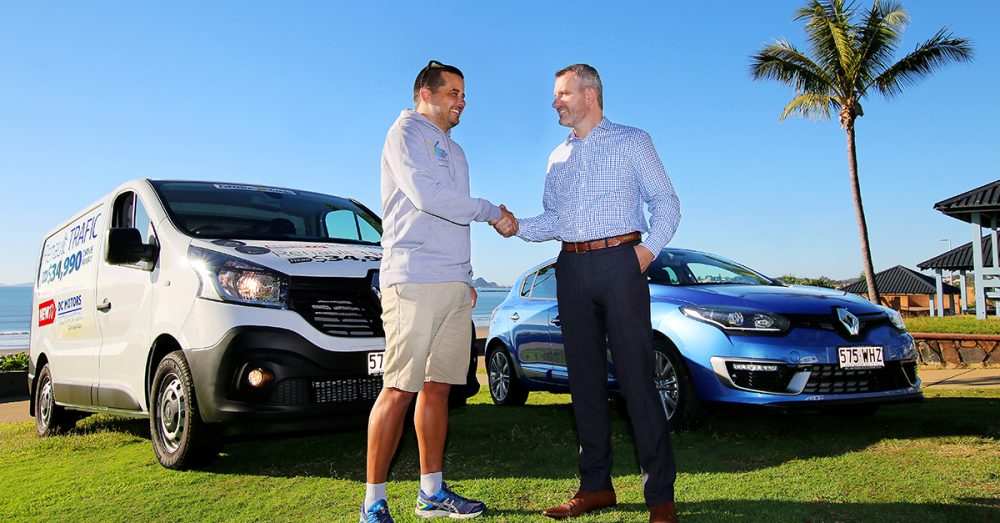 YTF Race Organiser Glenn Skinner and DC Motors General Manager Sheamus O’Reilly are delighted to announce that DC Motors Renault are now onboard as the principal naming sponsor for the Yeppoon Triathlon Festival.

“We’re extremely proud to now have DC Motors on board as our principal sponsor especially with the backing from Renault.” said Glenn.

“Having brands of their calibre is a perfect reflection of the level we’re looking to lift the Festival”.

“They will also be donating a fleet of support vehicles for us to use during the festival which is fantastic as well as having a vehicle display on the Yeppoon foreshore for people to see”.

With a view to drive the Festival to greater heights DC Motors Renault are passionate exponents of any positive event in Central Queensland, shown recently in their ‘Drive for Life’ which raised over $24,000 for Cancer Council Queensland.

“We definitely need more positive events in CQ like the Yeppoon Triathlon Festival” said Sheamus. “Renault is a fantastic award winning brand and like the triathlon festival one that is new to the area so we’re pleased they can be associated”.

The DC Motors Renault foreshore vehicle display will be open for everyone to see during the festival and will also be the venue for competitors and the public alike to enter in our free Great Keppel Island Hideaway Holiday Competiton.