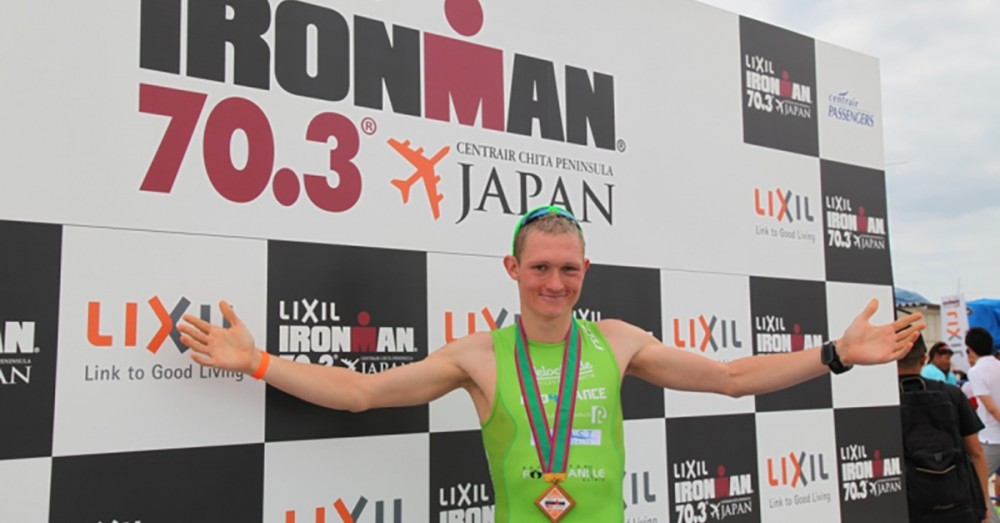 Leafing through a running magazine in the summer of 2009 Ryan came across a K-Swiss add for Ironman, the tag line was: 140.6 Miles of Awesome. This marked the beginning of a turning point in his sporting career.

He’d grown weary of injuries and having already achieved his dream of representing NSW at national athletics and cross country (all in his final year of high school!) was looking for a new challenge. On January 7th 2010 he walked into a bike shop to buy his first bike, perhaps this should have happened a decade earlier but better late than never we reckon.

‘Training in the early days consisted of my standard running programme supplemented by rides to and from the pool. Despite being a hopeless swimmer and cyclist I persisted as the gains I was getting from my training in these disciplines were immensely satisfying’, says Ryan.

‘A good friend of mine later asked me what on earth made me think I could be a triathlete with no former experience, I guess it was because no one told me I couldn’t.’

The Yeppoon Traithlon Festival’s organiser, Glenn Skinner, recently caught up with Ryan for a quick Q&A.

YTF: What leg of the YTF are you most looking forward to?

Ryan: The swim. I wouldn’t normally pick the swim but I love the idea of warm crystal clear waters. I’m currently based in Adelaide and I can guarantee that come August competing in a mild climate will be a very welcome change.

YTF: What race are you following up the YTF with?

Ryan: This year I’ve focused on the Olympic distance which is a little out of character. For the first time I’ve started working with a coach, Alex Price from AP10 (http://ap10.com.au/). This has been a great decision and we have been changing up a lot of things. I’m enjoying the sport a lot more. That said, I’ll definitely be returning to long course after the YTF, most likely with a 70.3.

YTF: Will competing in the YTF help prepare you for long course?

Ryan: Absolutely. The plan was to come back to the Olympic distance in order to work on increasing speed. Hopefully I can take that speed back to long course! It is also nice to have a festival surrounding the event. In training you simply can’t simulate a mass open water start. With the YTF holding an open water swim on the Saturday it gives you a rare opportunity to do that . You don’t even have to swim the whole thing hard. I think the experience is very valuable, particularly if you are racing in the Sprint or Olympic the following day.

YTF: The YTF is a new event, what drew you to compete?

Ryan: The YTF may be a new event but Yeppoon has a history of hosting great triathlon events. At the end of the day all triathlons are swim, bike and run. You can probably find a local race set in an industrial area or on quiet rural roads but it isn’t often you get to race in a tropical paradise. I get most excited about the places that I compete, which is what drew me to Yeppoon. That combined with the multi lap run and bike courses which make spectating so easy. These factors are particularly important when travelling with friends and family.

YTF: Will you be trying to take a bit of a break to enjoy Yeppoon and the region after the race?

Ryan: I’ll be making the most out of my time there, both before and after the race, to enjoy the region that’s for sure. Places like Yeppoon are always so relaxing and I’ll come back to the area many more times. The flights to Rockhampton are pretty cheap and regular so it easy to organise.

YTF: What gives you inspiration to keep competing, any words of advice for newbies?

Ryan: Golly, asking the hard questions! I’ve lost a lot of faith in endurance sports as allegations of doping have been made and subsequently proved. I’d like to believe that you can compete at the highest level without resorting to cheating. Unfortunately the only way to really know is if you can get there yourself. For me that is the daily challenge and goal.

As for advice for new athletes… don’t think that being a triathlete means you have to do an Ironman. Stay with the shorter events, enjoy the atmosphere, keep a balanced life, improve and have fun with it.

Ryan: Triathletes hate rest, myself included. Physically the body is capable of remarkable things and it can be pushed very hard. Mentally it is much more difficult. Even if you are feeling strong it is important to include easier periods of training in order to keep mentally fresh. If training isn’t fun then you’re doing it wrong!